Inside a violent video game, where punks roam the corridors and peacekeepers shoot to kill, a cleaner dreams of being upgraded to a game character until a young hacker gets into the system and short circuits his options.

In September 2014 Torrid Films was approached by Autism Spectrum Australia (Aspect) to help out with a unique filmmaking challenge: to create a short science fiction drama that would showcase the talents of Aspect’s clients and staff and do this inside 30 days!

Why just 30 days? The film was to be made especially for a sci-fi film festival challenge where all competing films had to be written, produced and completed during October 2014.

And with that a co-production between Torrid and Aspect was forged that brought together many creative talents both on and off the spectrum to work alongside professionals and non-professionals in creating a truly collaborative piece of light entertainment. The project involved 18 cast and 62 crew working on set and behind the scenes to pull the film together in record time. All props and costumes were handmade from the plentiful bounty to be found at Sydney’s legendary Reverse Garbage where objects like shop window dummies, dog collars, bike pedals, drink bottles and knitting needles came into their own. The original script concept by Andrew Morris and Thomas Kuzma was developed by Aspect’s writing team which included Elise Bottle, Andrew Morris, Thomas Kuzma and Justin Schippers. Zoë Harvey leant a hand with writing and script editing as did Peter Neale, Head Writer, who also mentored the team. The cast featured Brendan Richards as Gil, Gabrielle Bartlett as Val, Madison Kester as the Hacker and Melissa Wilton as the voice of the Central Controller. A small herd of Punks, Peacekeepers and inflatable characters rounded out the cast. The soundtrack was composed by Jerry Kahale and featured additional tracks by the team from Club Weld  including Pasko Schravemade, Taylor Molnar, Mitch Owen and Peter Kirwan. The film was directed by Zoë Harvey, Cinematography by Tomás Ybarra, Location Sound by Dave Rae, Production Design by Helen Fitzgerald and Ocea Sellar with a hand from An Tran, Make-up and Hair by Berinda Karp and her team, Wardrobe by Mary Buckler-Morris, Production Stills by Timothy Tong, Editing by Matthew Walker, Visual Effects by Adrian King and Redboat, Colour Grade by Brendan Dillon at Colourspace Post, Opening titles by Josh Heilpern and Sound Post by Geoff McGarvey at SoundEngine. The film was a finalist in the festival and was later formally launched at a private screening in Sydney to celebrate International Day of People with Disability 2014. 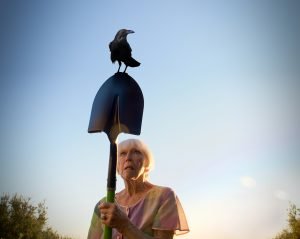